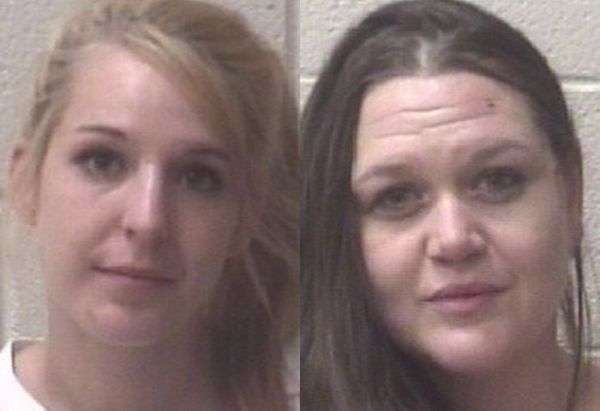 24-year-old Payton Rose Schwantes of Stony Point and 38-year-old Chrystal Gail Stikeleather of Taylorsville were arrested Saturday (May 1) by Alexander County Sheriff’s Officers. Schwantes is charged with two felony counts of trafficking methamphetamine and one misdemeanor count of possession of drug paraphernalia.

Stikeleather is charged with two felony counts of trafficking in meth, single felony counts of maintain a vehicle, dwelling, or place for controlled substance, and flee to elude arrest with a motor vehicle. She’s also charged with misdemeanor counts of injury to personal property and possession of drug paraphernalia.

Saturday at approximately 8:30 p.m., an ongoing three-month investigation into drug activity led to a reported high-speed chase that originated on Damascus Church Road in Hiddenite and ended on Highway 115 in Iredell County near Phil Redmon’s store. Iredell County Sheriff’s Office Deputies deployed stop sticks to attempt to stop the vehicle. The vehicle continued traveling at a slower rate of speed after the stop sticks were struck.

249 grams of meth were reportedly seized from the scene. Both suspects were jailed in the Alexander County Detention Center, Schwantes under a $75,000 secured bond, Stikeleather under a $60,000 secured bond. They were both scheduled to appear in District Court Monday (May 3). Stikeleather was also on active Federal Probation.

This is a joint investigation between the Department of Homeland Security’s Narcotics Division, Taylorsville Police Department, and Alexander County Sheriff’s Office. Federal charges for the narcotics that were seized as a result of the vehicle chase are pending.