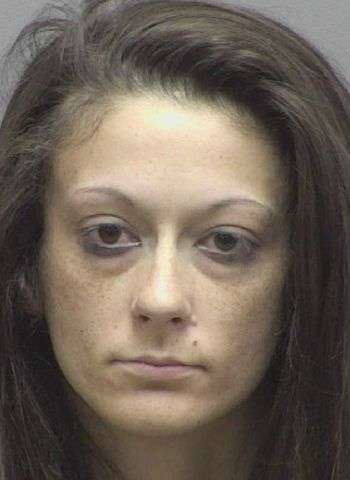 27-year-old Tabatha Leeann Rogers of Dallas, NC, was arrested Saturday (January 9) by Lincoln County Sheriff’s Officers. She’s charged with felony possession of a stolen vehicle and misdemeanor counts of possession of drug paraphernalia and driving while license revoked. She was also served with outstanding warrants from Catawba County for hit and run with property damage and driving while license revoked.

Deputies were dispatched to the 3500 block of East NC 27 Highway at approximately 1:15 p.m. Saturday to investigate a report of a suspicious vehicle operated by an individual with outstanding warrants. An anonymous caller reported the vehicle was white, however they believed it may have been painted with a can of spray paint.

Officers conducted a traffic stop on the vehicle on East Highway 27, it was being driven by Tabatha Leeann Rogers. She told deputies she had purchased the vehicle from the owner. A check of NCIC records revealed the truck had been entered as stolen by Belmont Police. Deputies also reportedly recovered drug paraphernalia from the truck.

Rogers was placed in the Harven A. Crouse Detention Center under a $7,000 secured bond on the Lincoln County charges and a no bond hold for Catawba County. A Lincoln County District Court appearance is scheduled for February 2.