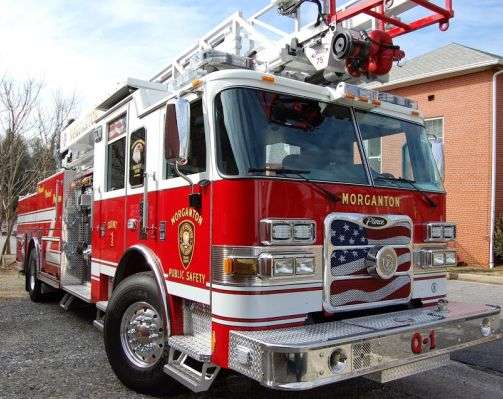 Morganton Department of Public Safety (MDPS) fire units were dispatched early Saturday morning (January 30) to 112 Woodcliff Drive for a reported structure fire. Two occupants of the home were able to escape from the residence prior to calling 911. As personnel got closer to the scene, smoke could be seen from a good distance away.

The single story residence was fully involved with fire extending along a wooden fence surrounding the back yard. It threatened several vehicles in the driveway. Upon initial inspection the fire had already vented through the roof and gable ends of the residence.

Units began fighting the fire from the exterior and then moved indoors. Units used tools on hand to remove portions of the ceiling to get at the fire in the attic as well as throughout the main level of the home.

After approximately 30 minutes, the fire was brought under control. The occupants of the residence were treated for minor burns and smoke inhalation at the scene by Burke County EMS. The Red Cross was contacted to assist the displaced family. The full extent of the damage to the home was not included in the news release about the blaze.

The investigation into the cause of the fire is ongoing at this time. MDPS thanked the following agencies for their assistance; Burke County EMS, Duke Energy, Triple Community Fire Department, City of Morganton Development and Design, and the American Red Cross.

25-year-old Steven Michael Day of Laurel Street N.E. in Valdese has been arrested by Burke…

60-year-old Harry Lee Guin, Jr. of Old Mountain Road in Troutman has been arrested by…