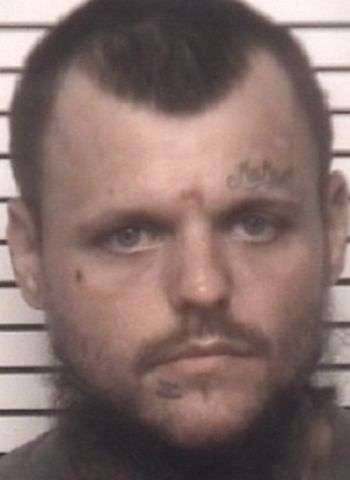 On Sunday, members of the Iredell County Sheriff’s Office Warrant Squad received information on a location of a person who was entered as wanted, Dustin Blaine Owensby. The informant also advised the deputies, that Owensby had been making statements about not going back to prison and he would. “Shoot it out with law enforcement officers if they attempted to take him”.

Warrant Squad Deputies along with Road Patrol Deputies and Criminal Investigators responded to an address on Weaver Street just off of East Greenbriar Road. After setting a perimeter around an older model camper there, the deputies began calling commands over a loudspeaker for Owensby to come out. A short time later a woman ran out of the trailer and after being interviewed by the deputies, confirmed Owensby was inside the trailer.

After more than two hours of calling commands for Owensby to exit the trailer, the decision was made to enter the building and search for him. After a brief search of the trailer, Owensby was found hiding behind a couch. He was taken into custody and transported to the Iredell County Detention Center.

The felony and misdemeanor charges stem from an investigation the Iredell County Sheriff’s Office conducted on March 22, 2022, regarding a break-in and larceny on Elmwood Road. In that case, a storage building was robbed of several power tools.

Owensby was jailed in the Iredell County Detention Center under $100,000 secured bond. He remained in jail as of this afternoon (April 5). His next District Court date is scheduled for April 25.

A charity golf tournament is scheduled for Friday, May 20 to assist in the prevention…