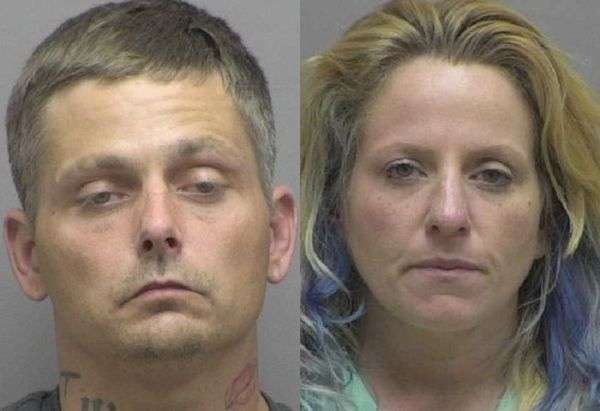 At approximately 12:30 a.m. Wednesday, deputies were observing traffic from a stationary location in the 3500 block of East N.C. 27 Highway when they saw a vehicle pass by that had a burned out driver’s side headlight. Officers activated their emergency equipment and stopped the vehicle a short distance away.

The male driver, Brandon Chad Ayers, told deputies he did not have a valid driver’s license. The vehicle was also occupied by Sara Lynn Reames. The driver was asked to step out of the vehicle and at that time officers spotted an orange needle cap for a syringe, giving them probable cause to search the vehicle. A search of the vehicle reportedly resulted in the discovery of meth, xanax, heroin, adderall, additional narcotics and two meth pipes.

Ayers was jailed in the Harven A. Crouse Detention Center under a $13,000 secured bond. Reames was placed in that facility under a $12,000 secured bond. Ayers remained in jail as of earlier today, Reames is not listed as an inmate in Lincoln County. They’re both scheduled to appear in District Court May 18.

Live Burn To Be Conducted By Hickory Fire Department

Today (May 13), Hickory firefighters will be conducting a live burn exercise, which consists of…

One Killed in Two-Vehicle Crash in Lincoln County Monday