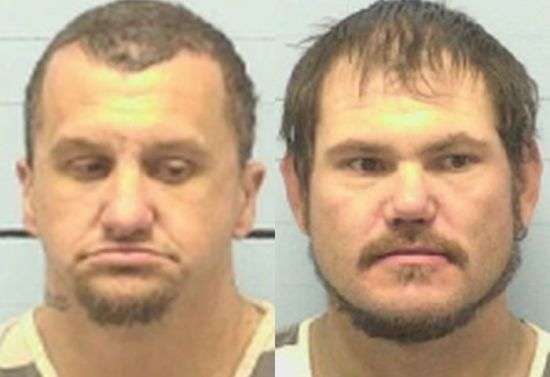 36-year-old Roger Lee Sparks of B & D Avenue in Morganton and 34-year-old William Douglas Thomas of Rhodhiss Road in Connelly Springs were arrested Wednesday (December 9) by Burke County Sheriff’s Officers. Sparks is charged with felony counts of possession of methamphetamine, possession with intent to manufacture, sell and deliver meth, trafficking in meth, maintaining a vehicle, dwelling, or place for a controlled substance, and possession of a firearm by a convicted felon. Thomas is charged on an indictment with felony larceny of a motor vehicle. He’s also charged with misdemeanor unauthorized use of a motor vehicle.

On November 30, 2020, after several weeks of investigation, narcotics detectives with the Burke County Sheriff’s Office and Morganton Department of Public Safety served a search warrant at an address on B & D Avenue in Morganton. During the course of the investigation detectives determined that an occupant of the residence, Roger Lee Sparks, was involved in illegal possession and distribution of meth.
Several items indicating the distribution of meth were seized including trafficking amounts of the drug and a firearm. Warrants for arrest were issued on Sparks. On Wednesday, Deputy U.S. Marshals with the Carolina Regional Fugitive Task Force located and arrested Sparks at an address on Icard School Road in Connelly Springs. Several subjects were also detained during the course of the arrest, and one of those people, identified as William Douglas Thomas, barricaded himself inside the residence.

Burke County deputies responded to assist with the situation. Burke County Detectives determined the barricaded subject had warrants for arrest in his name. For the safety of the public, officers closed Icard School Road while deputies and U.S. Marshals entered the residence. The wanted man, Thomas, was found hiding in the residence. He was taken into custody and he and Sparks were transported to the Magistrate’s office where they were charged.