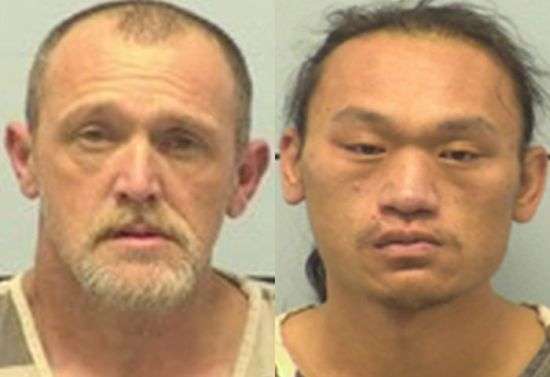 43-year-old Daryl Edward Ingle of Icard Dairy Barn Road in Connelly Springs and 28-year-old Scott Xiong of Henry Smith Street in Hickory were arrested by Burke County Sheriff’s Officers. Both suspects are charged with felony counts of possession of a stolen motor vehicle. Ingle is additionally charged with misdemeanor possession of drug paraphernalia.

During the month of November 2022, Burke County Sheriff’s deputies found and recovered three motor vehicles that had been stripped of parts and abandoned and on the roadside in eastern Burke County. A Honda CRV was found on November 5 and is being inspected by NC DMV Investigators for identifying numbers. A Honda Civic, reported stolen from Hickory, was found November 9, and an additional Honda Civic, reported stolen from Lincolnton, was found on November 21.

During a traffic stop on U.S. Highway 70 on November 22, a Burke County Sheriff’s deputy identified a vehicle stolen from Iredell County which was being driven by Daryl Edward Ingle. Ingle was arrested and charged. Detectives discovered that the stolen vehicles had previously been at an address on Henry Smith Street in Hickory, which is located in Burke County.

On November 30, Burke County detectives and NC DMV License and Theft investigators searched the residence and located multiple vehicle parts consistent with chop shop activity, including an engine from the Honda Civic stolen from Lincolnton. Detectives interviewed Scott Xiong, a resident of the home, and later arrested and charged him.

Bond was set at $10,000 secured for both suspects. Neither suspect is listed as an inmate in Burke County. They both have District Court appearances scheduled for December 16. This case is still under investigation and more charges are expected.