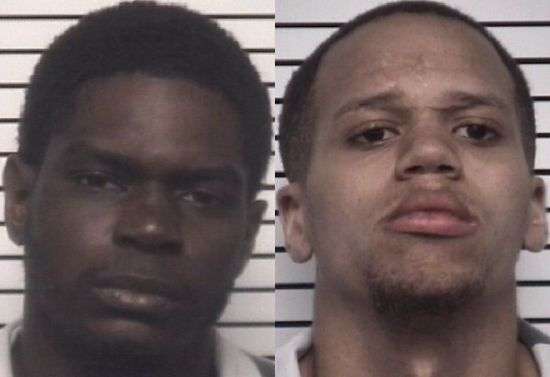 Last Friday (October 28) an officer was patrolling the area of Brawley School Road and Stutts Road near Mooresville when he saw a silver Chevrolet Impala displaying a revoked registration plate. A traffic stop was conducted and officers reportedly noticed a strong odor of marijuana coming from the vehicle. Hall reportedly pulled a bag of marijuana out from his jacket and handed it to the deputies. The two occupants advised the deputies that they had traveled to Mooresville to attend a party at a house in the Point and that they were supposed to park in the Food Lion Parking Lot at 1088 Brawley School Road to meet a shuttle service to take them to the party.

Hall was asked to step out of the vehicle. He did, and the deputies ran him through a criminal database to check his criminal history to determine if there were any outstanding warrants on him information came back showing Hall had two active federal arrest warrants out of Virginia on gun-related charges. The deputies searched the vehicle and reportedly found two loaded firearms, marijuana and cocaine, and drug paraphernalia. It was learned that Hall is a convicted felon who is prohibited from possessing a firearm.

Later the same day, a vehicle was spotted traveling on Brawley School Road. The vehicle was stopped and an officer made contact with the driver, John Lewis Sheppard. While running Sheppard’s driver’s license information, it was learned that Sheppard had an outstanding warrant for his arrest. Hodges was arrested and a search resulted in the reported discovery of two concealed firearms. A criminal database search determined one of the firearms was stolen from Mecklenburg County. marijuana and oxycodone pills were also reportedly found in the vehicle.

Hall was placed in the Iredell County Detention Center under $65,000 secured bond on the local charges and no bond on the Federal warrant. Sheppard was jailed in the same facility under $351,000 secured bond. Both suspects remained in jail as of earlier today (November 2). They both have District Court dates November 21.