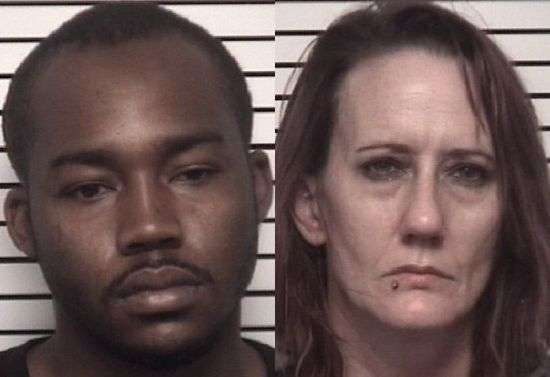 27-year-old James Lewis Hairston III of Moravian Falls and 44-year-old Trisha Marie Nelson of Wilkesboro were arrested last Saturday (February 20) by Iredell County Sheriff’s Officers. Hairston is charged with felony possession with intent to sell and deliver methamphetamine, along with misdemeanor counts of resisting a public officer and possession of drug paraphernalia.

According to information released Tuesday (February 23), on Saturday, a deputy performed a traffic stop on a vehicle at the intersection of Salisbury Highway and Old Salisbury Road. The officer spoke with the two occupants who were identified as Trisha Marie Nelson, and James Lewis Hairston.

Hairston said his name was Jamal Hairston which officers later learned was false. Once his true identity was determined, it was determined that Hairston had numerous outstanding warrants for his arrest. While speaking with Nelson and Hairston, the deputies believed there were illegal narcotics inside the vehicle. The vehicle was searched and officers reportedly found 14.4 grams of crystal meth, along with 45 dosage units of Alprazolam.

Both suspects were arrested on scene and taken to the Iredell County Detention Center. After Nelson and Hairston were processed by detention officers, suspicions arose about Nelson having additional narcotics concealed inside of her body. She was then transported to a local hospital where medical staff removed from Nelson, approximately 3.8 grams of Fentanyl. After the substance was removed, Nelson attempted to destroy it, but was unsuccessful.

Hairston was issued a $10,000 secured bond on the drug charges with an additional $140,000 secured bond on the failure to appear and other outstanding warrants for his arrest. Nelson’s bond was set at $15,000 secured. Hairston remained in jail as of earlier today (February 24). Nelson was no longer listed as an inmate. Nelson was scheduled to appear in District Court Tuesday. Hairston has a District Court date March 15.