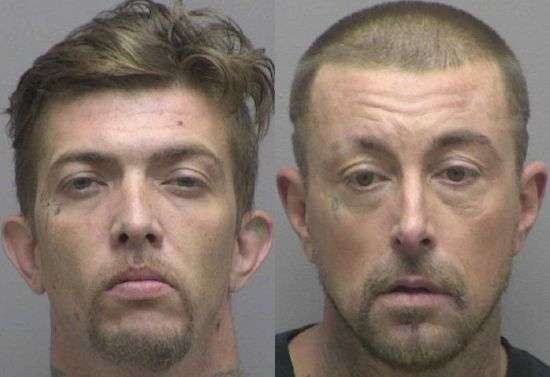 36-year-old Jerry Cicero Branch and 37-year-old Bradley Dale Earle, both of Iron Station were arrested by Lincoln County Sheriff’s Officers. They’re each charged with attempted first-degree murder. Branch is also charged with a felony count of possession of a firearm by a felon. The arrests are in connection to a Memorial Day shooting incident, previously reported on WHKY.

On Monday, May 30, Lincoln County Sheriff’s deputies were dispatched to a shooting on Sun Valley Trail in Lincolnton. Deputies arrived to find the victim with a single gunshot wound to the lower left leg. During the investigation detectives discovered that the shooting was the result of a planned robbery.

The male victim was brought to the Sun Valley Trail location and was immediately confronted by four or five individuals, two of which were armed with handguns. He was physically assaulted, robbed and shot by the group before they fled the scene. The victim was transported to a local area hospital where he underwent surgery. He is expected to recover from the incident.

On May 31 the first arrest was made. Detectives arrested 35-year-old Aquil Giovonni Jackson of Lincolnton on a charge of attempted first degree murder. His next District Court date is June 16. On June 7 warrants were issued for Branch and Earle. Earle was arrested on June and placed in the Harven A. Crouse Detention Center under a $75,000 secured bond. He has a District Court date June 30. On June 9, deputies and detectives arrested Branch. He was placed in jail under a no bond hold.

The case is still under investigation and additional charges are expected. Anyone with information on the incident is asked to contact Detective Hendrix at 828-455-6762, the Lincoln County Sheriff’s Office at 704-732-9050, Lincoln County Communications Center at 704-735-8202, or Lincolnton/Lincoln County Crime Stoppers at 704-736-8909.

Hickory Man Jailed for Failure to Appear on Assault Charges