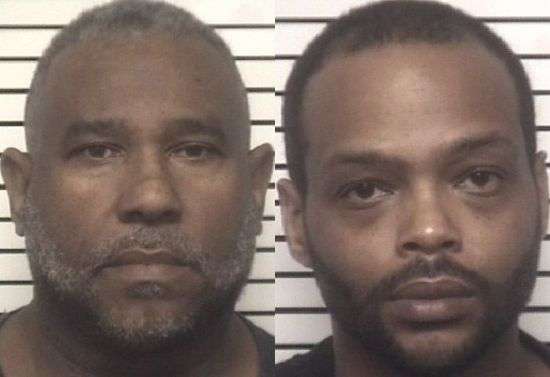 54-year-old Kevin James Davis of Columbia, South Carolina and 36-year-old Jamaal Lee Fairfax of Fairchance, Pennsylvania, were both arrested by Iredell County Sheriff’s Officers. Both suspects were charged with felony counts of trafficking cocaine by transportation and possession, possession with intent to sell or deliver cocaine, and maintaining a dwelling or vehicle for the sale or use of a controlled substance. They are also charged with misdemeanor counts of possession of marijuana, and possession of drug paraphernalia.

After approaching the vehicle, the deputies encountered Jamaal Lee Fairfax who was driving the vehicle, and Kevin James Davis who was a passenger. While speaking with the two men Fairfax said the two were traveling from Florida back to Pennsylvania.
The deputies asked Fairfax to exit the vehicle so they could speak with him about the violation. While Fairfax was getting out of the vehicle, he reportedly appeared to throw an unknown object into the driver’s seat while he was getting out.

A K-9 officer was called to the scene to assist with the traffic stop. A positive alert was given on the vehicle. After that alert, Davis was asked to step out of the vehicle and he was patted down. A small amount of marijuana, and an unknown powder substance were reportedly found in his possession.

When the vehicle search was conducted, officers reportedly found a large amount of suspected cocaine in a food saver bag found that was located in an overnight bag laying on the rear seat of the vehicle. After finding the suspected cocaine Fairfax and Davis were placed under arrest.

A total of 660 Grams or 1.47 pounds of Cocaine and ten Grams of marijuana were seized. The cocaine has an estimated street value of more than $60,000. Both suspects have felony convictions in multiple states. They were each placed in the Iredell County Detention Center under $200,000 secured bond apiece. They remained in jail as of earlier today (March 4). District Court appearances are scheduled for March 24.

28-year-old Tevin Jerome Davis of Statesville, will serve an active prison term of five to…