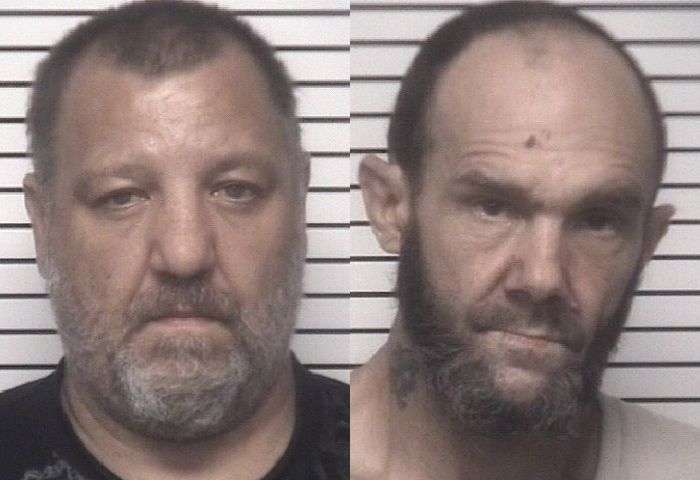 50-year-old Gregory David Evans of Overcash Road in Troutman and 42-year-old Christopher Brandon Propst of Sunrise Avenue in Maiden have both been arrested by Iredell County Sheriff’s Officers. They were each charged with felony possession with intent to manufacture, sell, or deliver methamphetamine and misdemeanor possession of drug paraphernalia. Evans was also charged with felony counts of possession of a stolen firearm and harboring a fugitive. Propst faces an additional felony count of possession of a firearm by a convicted felon, and he was served with numerous outstanding warrants.

The two men were arrested Friday (November 5) when Deputies stopped a Chevrolet Silverado truck for numerous traffic violations at the intersection of Old Mountain Road and Buffalo Shoals Road. A Deputy identified the driver as Gregory David Evans. One of the passengers told Officers he was out on bond for selling meth. The suspects told Officers there were no illegal items in the truck. Evans gave consent to search the truck.

The search turned up 21.28 grams of meth, a Ruger LC9 9mm handgun, and drug paraphernalia. The handgun had been reported stolen from Anderson, South Carolina.

Upon further questioning, one of the suspects, who had initially given Officers a fictitious name, was positively identified as Christopher Brandon Propst. A criminal records check showed that Propst had ten outstanding warrants from several counties.

Evans and Propst were taken into custody and transported to the Iredell County Detention Center. Evans was given a $35,000 secured bond. Bond for Propst was set at $247,000, secured. Evans was scheduled to appear in District Court today (November 8), while Propst has an Iredell County court date on November 29. Propst also has District Court appearances scheduled for November 12 & December 6, along with a Superior Court date on November 12, all in Catawba County. He’ll appear in Lincoln County Superior Court on November 30.