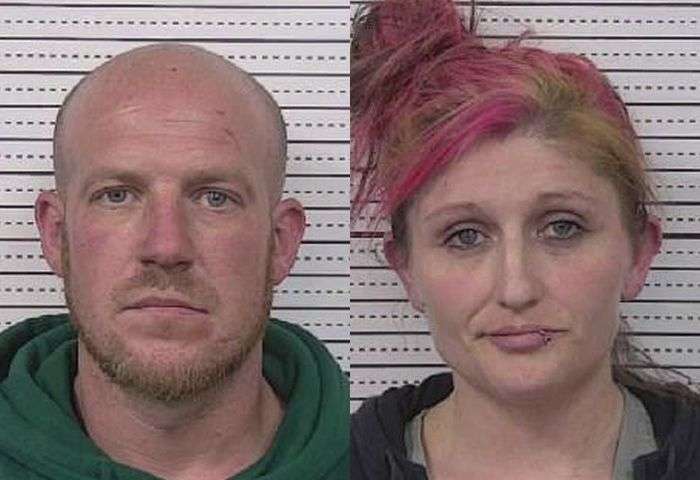 32-year-old Jeffrey Scott Ohmer of Fayetteville and 34-year-old Destiny Nicole Miller with no listed address were both arrested by Caldwell County Sheriff’s Officers yesterday (April 5). They were each charged with two counts of trafficking in methamphetamine and one count of maintaining a vehicle for a controlled substance. Ohmer was also charged with one count of possession of a stolen motor vehicle.

At 12:20 a.m. today, Deputies stopped a 2012 Black Ford F-150 on Smokey Creek Road near the intersection with Union Grove Road in Lenoir. The truck had been reported stolen from Harmony Lane in Hudson on the morning of April 4 after it was taken the previous night.

The driver was identified as Jeffrey Scott Ohmer and the only passenger was identified as Destiny Nicole Miller. A search of the vehicle and its occupants turned up three separate bags containing 105.5 grams of meth, as well as scales and bags. The meth seized has a total street value of $15,750, according to North Carolina state drug guidelines. The stolen truck was returned to the owner.

Ohmer was placed in the Caldwell County Detention Center with bond set at $225,000, secured. Miller was given a $200,000 secured bond. Both suspects were scheduled to make first appearances in District Court tomorrow (April 6) in Lenoir. They each have additional court dates in Caldwell and Burke counties on unrelated meth charges.

Alexander Board Of Elections To Conduct Tests On Voting Systems