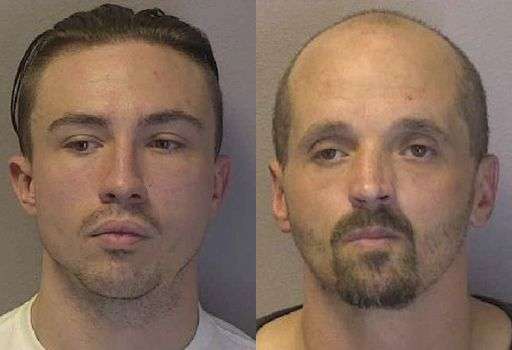 23-year-old Skylar Alexander Branson of Kool Park Road N.E. in Hickory and 38-year-old Jason Anthony Riddle of Drumstand Road in Stony Point have both been arrested by Hickory Police. Branson was arrested on an outstanding warrant as a fugitive awaiting extradition to another state. Riddle was charged with felony possession of a schedule II controlled substance (methamphetamine) and felony possession of a controlled substance on prison or jail premises, along with one misdemeanor count of possession of drug paraphernalia. Riddle was also served an outstanding warrant for simple assault.

They were arrested after Hickory Police stopped a 2004 Mazda on Highway 70 S.E. near C.V.C.C. During the stop, Officers found that both Riddle and Branson had outstanding warrants. During their arrests, Officers found drug paraphernalia and four grams of meth. Branson is wanted by the Johnson Co. Sheriff’s Office in Mountain City, Tennessee on felony counts of reckless endangerment and evading arrest with a motor vehicle.

The suspects were taken into custody shortly after noon Friday (September 18). Branson was processed at the Hickory Police Department and later released under a $19,000 unsecured bond. Riddle was placed in the Catawba Co. Detention Facility under a $1,000 secured bond. He has since been released. They were both scheduled to appear in District Court today (September 21) in Newton.