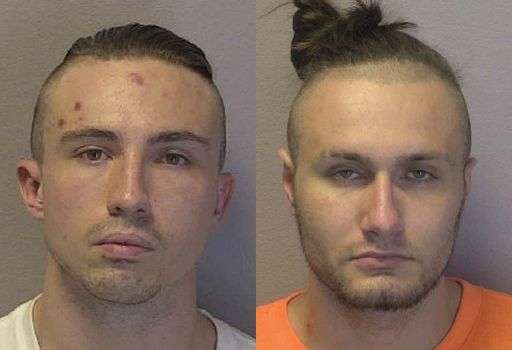 23-year-old Skylar Alexander Branson of Kool Park Road in Hickory and 26-year-old Tyler Austin Patterson of Deal Road in Claremont were both arrested by Hickory Police at about 9:45 last night (September 30). Branson was arrested for failure to appear on a warrant as a fugitive awaiting extradition to another state. Patterson was charged with felony possession of heroin and was also served with an outstanding misdemeanor warrant.

They were arrested following a traffic stop at a convenience store on Highway 70 S.W in Hickory. Officers 0.6 grams of heroin and 10 grams of marijuana. Branson is wanted by the Johnson Co. Sheriff’s Office in Mountain City, Tennessee on felony counts of reckless endangerment and evading arrest with a motor vehicle.

Both suspects were taken into custody without incident. They were jailed in the Catawba Co. Detention Facility with bond for Branson set at $10,000, secured, while Patterson was given a $5,500 secured bond. Patterson has since been released. Both men were scheduled to appear in District Court today in Newton.