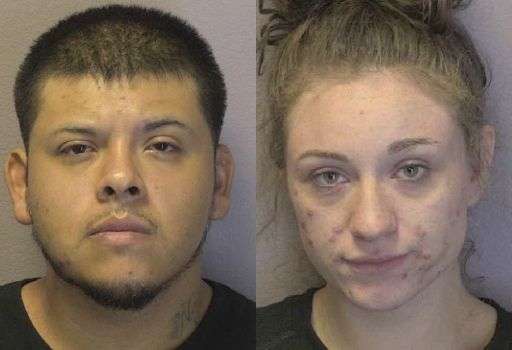 28-year-old Josue Romero Martinez, who is listed as a homeless person from Hickory, and 23-year-old Bailey Drew Bolick of Starcross Road in Lenoir were both arrested by Hickory Police early this morning (October 5). Martinez was charged with felony counts of trafficking in cocaine and possession of a firearm by a felon. Bolick was charged with felony trafficking in methamphetamine. Martinez was reportedly in possession of 96 grams of cocaine and a handgun at the time of his arrest. Bolick was allegedly in possession of 44 grams of meth.

Martinez was also served with a warrant for a felony out-of-county probation violation. He is on probation as he serves a 24-month suspended sentence following an August 2019 felony conviction in Catawba County for trafficking a schedule II controlled substance. He had been listed as an absconder from probation.

Both suspects were taken into custody without incident at about 2:40 a.m. today at a hotel on 13th Avenue Drive N.W. in Hickory. They were jailed in the Catawba Co. Detention Facility. Bond for Martinez was set at $150,000, secured, while Bolick was given a $25,000 secured bond. They were both scheduled to make first appearances in District Court today in Newton. Martinez also has a Superior Court date on the probation violation coming up on October 13.

38 new cases of COVID-19 were confirmed Thursday (July 30) in Catawba County, increasing the…