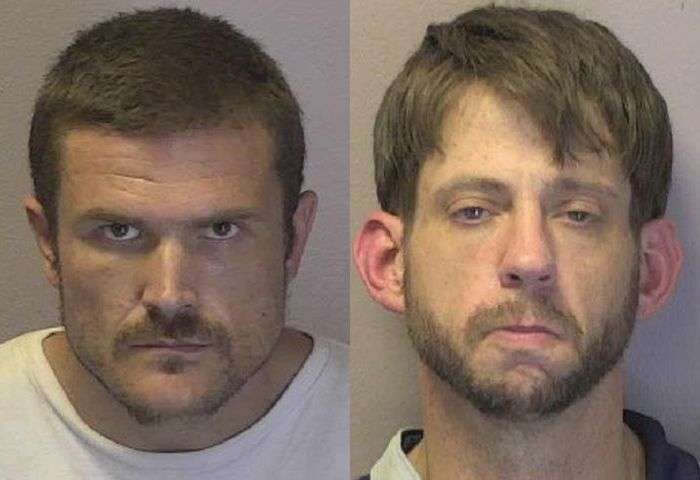 30-year-old Jeremy Edward Harrell of Whitegate Lane in Newton and 39-year-old Christopher Douglas Cook, who lists an address in a hotel on 13th Avenue Drive S.E. in Hickory, were both arrested by Hickory Police at 11:20 Wednesday morning. Harrell was charged with two felony probation violations and several outstanding felony and misdemeanor warrants. Harrell was charged with failure to appear on the probation violations and on felony counts of possession of methamphetamine and possession with intent to manufacture, sell, or deliver meth. He also reportedly failed to appear in court on misdemeanor counts of driving while license revoked, possession of drug paraphernalia, and fictitious or altered title, registration card, or tag. Cook was charged with felony possession with intent to manufacture, sell, or deliver a schedule II controlled substance (meth).

Both men were taken into custody without incident at a different hotel on 13th Avenue Drive S.E. They were both jailed in the Catawba County Detention Facility. Harrell was given a $71,000 secured bond. Cook was initially held without bond. Bond has since been set at $10,000. Harrell will appear in Superior Court on October 28 and November 1, with a District Court date scheduled for November 12. Cook will appear in District Court on September 23. All the court appearances are in Newton.

At about 9:15 last night (August 25), Hickory Firefighters were dispatched to a structure fire…