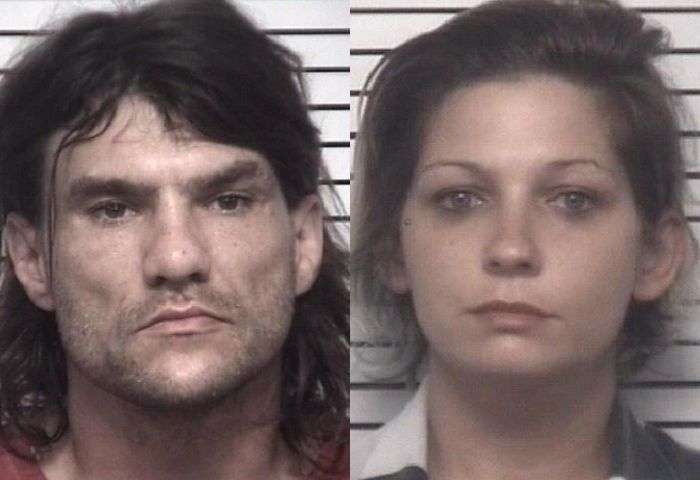 41-year-old Brandon Matthew Nelson of Eagle Springs, North Carolina and 32-year-old Ashley Loree Ray of Seagrove, North Carolina have both been arrested by Iredell County Sheriff’s Officers. They were each charged with felony counts of trafficking of methamphetamine, possession of meth, possession of cocaine, and maintaining a vehicle, dwelling, or place for the sale or use of a controlled substance, along with misdemeanor counts of possession of marijuana and possession of drug paraphernalia. Nelson’s arrest was previously reported by WHKY on April 14.

Both suspects were arrested last Wednesday (April 13) when a Deputy stopped a gray Toyota passenger car for a traffic violation on Salisbury Road near Statesville. The Deputy spoke to the driver, Brandon Matthew Nelson, and the passenger Ashley Loree Ray. Nelson said they were traveling from Moore County to Granite Falls; however, in the course of the incident, he gave multiple different stories about their origins and their planned destination.

Another Deputy arrived to assist. The Officers gathered enough information to conduct a search of the vehicle. During the search, 181 grams of meth, six grams of cocaine, and marijuana were found in a hidden compartment under the hood. The drugs were packaged in a manner consistent with the sale and distribution of controlled substances.

Nelson and Ray were taken into custody without incident. They were placed in the Iredell County Detention Center with bond for each set at $25,000, secured. Both suspects will appear in District Court on May 4.

Nelson has a criminal history that includes felony counts of fleeing to elude arrest with a motor vehicle, financial card fraud, larceny (two counts), creating a counterfeit controlled substance, forgery of an instrument (four counts), possession of a firearm by a convicted felon, breaking & entering, and the sale of a controlled substance within 1,000 feet of a park. He has also been charged as an habitual felon. Nelson’s history also includes misdemeanor counts of possession of marijuana, breaking & entering, shooting of signage, and larceny (two counts). Ray’s criminal history includes only a level one D.W.I.