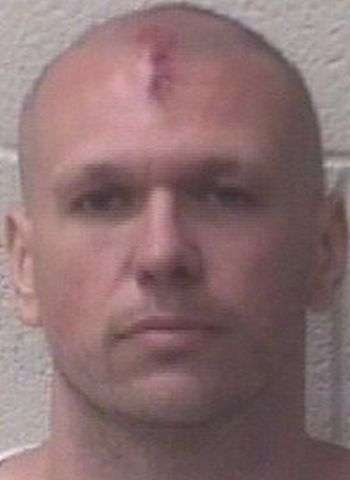 37-year-old Scott Edward Davis of Taylorsville was arrested today (July 13) on charges filed by two agencies. Taylorsville Police charged the suspect with felony first-degree burglary, assault on a government official, hit and run leaving the scene of an accident, driving left of center, and two counts of resist, delay, and obstruct an officer. The Alexander County Sheriff’s Office charged Davis with breaking & entering and damage to real property.

The Taylorsville Police Department responded to an address on East Main Avenue at approximately 12 a.m. today. A blue Ford Ranger pickup had crashed into a utility pole. The pole was severed and the driver of the truck was not at the scene.

While investigating the wreck, officers received a break-in alarm at the Alexander County Services building on Main Street. A glass door had been smashed. A person entered the building and sustained cuts from the broken glass. Taylorsville Officers and Alexander County Deputies responded to the location but again the suspect was missing.

A few minutes after arrival at the County Services Building, a 911 call indicated a citizen was holding a man at gunpoint at a residence on 3rd Avenue SW. After responding to the call, officers encountered the subject who had broken into the home. According to arrest report, police had to use force to place the man in custody. Video footage from the County Services Building confirmed the suspect as Davis.

Davis was jailed in the Alexander County Detention Center under $23,000 secured bond. Additional charges are possible. A District Court date is July 18.