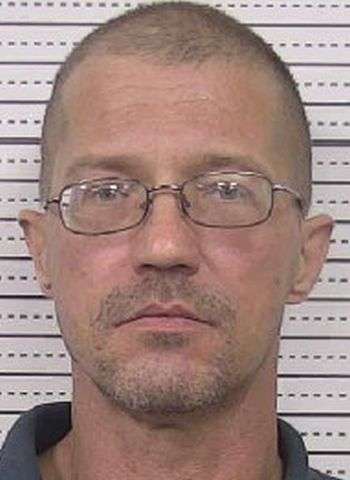 48-year-old Chad James Emke of Linneys Mountain Road in Taylorsville was arrested by authorities in Caldwell County today (July 12) on charges of assault with a deadly weapon with intent to kill inflicting serious injury and child endangerment. He was arrested in connection to a shooting near the Caldwell County Courthouse this morning.

At about 10:50 a.m. today, Lenoir Police responded to a shooting near the courthouse on North Main Street in Lenoir. Upon arrival, Officers found a 35-year-old male victim from Lenoir suffering from apparent gunshot wounds to his upper body. The victim was initially transported to Caldwell U.N.C. Healthcare and later transferred to Carolinas Medical Center Main in Charlotte with life-threatening injuries. No update on his condition is available.

According to a press release issued by the Lenoir Police Department, Emke and a ten-year-old male juvenile were in a vehicle in the roadway in front of the courthouse when the victim approached Emke’s vehicle and a verbal altercation ensued. During the altercation, Emke allegedly drew a 9mm semi-automatic pistol and shot the victim in the upper body twice. Initial Law Enforcement on the scene began administering aid to the victim until medical responders arrived.

Emke had a scheduled court appearance scheduled today at the courthouse for custody-related issues. Emke and the victim were acquainted with one another. Investigators believe the shooting to be an isolated incident. The male juvenile was not physically harmed during the incident.

Emke was taken into custody without incident at the scene and was transported to the Lenoir Police Department for questioning. He was then taken to the Magistrate’s office where he was charged accordingly and then jailed in the Caldwell County Detention Center under a $500,000 secured bond. No court date is currently listed.

16 new cases of COVID-19 were reported Friday (May 21) in Catawba County, increasing the…

Maiden Resident Charged In Connection To Friday Shooting In Newton