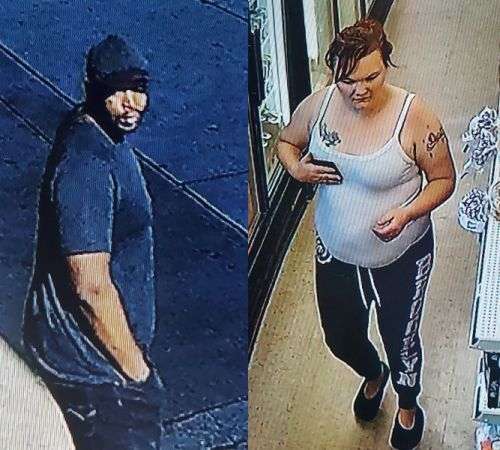 Authorities are seeking two suspects wanted on multiple charges in Burke County. On September 26, 2022, the Burke County Sheriff’s Office responded to the Cubbard Express convenience store on Old NC 10 in Hildebran, regarding a motor vehicle theft. Deputies spoke to the victim and learned that a black male and white female had stolen his white Kia SUV while the victim was inside the store.

Detectives obtained video of the suspects from the store surveillance and cameras in the surrounding area. Photos were posted on social media requesting the public’s assistance with identification of the suspects. Numerous tips identified the suspects as 33-year-old Dustin Fernandez Leone Brewton and 25-year-old Bridget Anne Bessette, who are both listed as being homeless residents of Catawba County.

On October 4, information was obtained that the stolen vehicle was in Catawba County. Detectives working with Catawba County Sheriff’s Office recovered the stolen vehicle which was turned back over to the victim. Brewton and Bessette have outstanding warrants related to the case. They’re each charged with felony counts of larceny of a motor vehicle and possession of stolen goods.

If you have information on the suspect’s whereabouts, call the Burke County Sheriff’s Office at 828-438-5500.