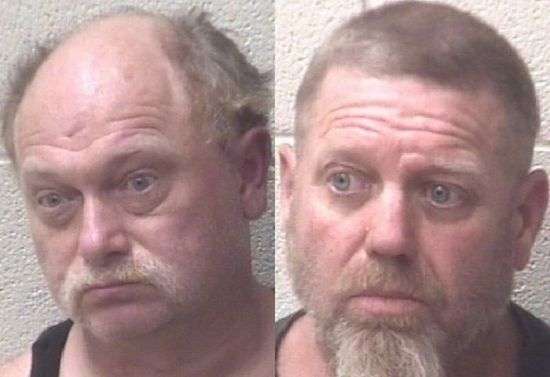 52-year-old David Larry Abernathy, Jr. and 55-year-old Todd Lee Hefner, both of Taylorsville, were arrested Monday (March 7) by Alexander County Sheriff’s Officers. Both suspects are charged with felony possession of methamphetamine. Abernathy is additionally charged with felony possession of a stolen motor vehicle. A third suspect was arrested on a misdemeanor drug charge.

On Monday, at approximately 5:00 p.m., a hit confirmation was received on a stolen vehicle via the Flock Safety License Plate Reader Camera that is being utilized by the Alexander County Sheriff’s Office in the Bethlehem Community. The hit confirmation was received on a license plate of a silver Chevrolet HHR, which was reported stolen on Sunday night (March 6) in Burke County.

Officers responded to the area, where the vehicle was found and the three suspects, who were in the Chevrolet were detained. A search of the vehicle was conducted, at which time methamphetamine and drug paraphernalia were reportedly found. All three occupants of the vehicle were then placed under arrest.

Abernathy received a $15,000 secured bond, Hefner’s bond was set at $7,500 secured. Neither suspect is listed as an inmate in Alexander County. Both men are scheduled to appear in District Court in Taylorsville next Monday (March 14).