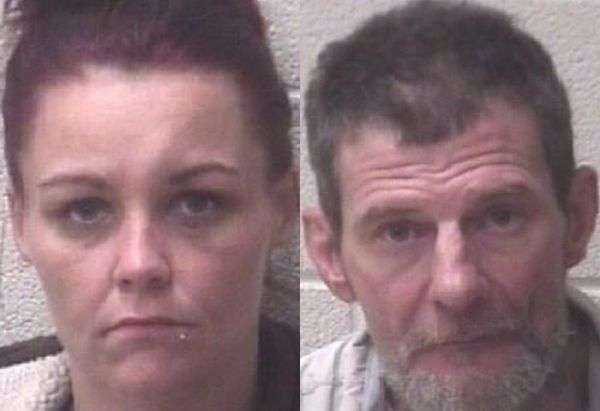 33-year-old Tiffany Ann Dickerson of Stony Point and 48-year-old Christopher Lynn Bailey of Taylorsville were arrested Tuesday (March 15) by Alexander County Sheriff’s Officers in separate cases. Both suspects are charged with possession of methamphetamine and possession of drug paraphernalia. Dickerson was also charged with second-degree trespassing. There is an outstanding warrant against Bailey for failure to appear on a larceny charge.

At approximately 4 a.m. Tuesday, Deputies with the Alexander County Sheriff’s Office were attempting a paper service which led to a trespassing complaint on Sloan Road in the Hiddenite Community. After further investigation, Tiffany Ann Dickerson was arrested and charged with with the drug and trespassing counts. Her bond was set at $5,000 secured and a District Court date is scheduled for next Monday (March 21).

Also on Tuesday in the late evening hours a patrol Deputy stopped to investigate a suspicious person walking on foot in the Hiddenite Community on NC 90 East. The individual was identified as Christopher Lynn Bailey. Bailey was confirmed to have an outstanding warrant for his arrest for failure to appear. Bailey was taken into custody on that outstanding warrant. Further investigation revealed that he was in possession of methamphetamine and drug paraphernalia. Bailey was also charged with the drug possession offenses and given a bond of $8,000 secured with a court date set for April 19th. Both suspects remained in jail as of this afternoon (March 16).