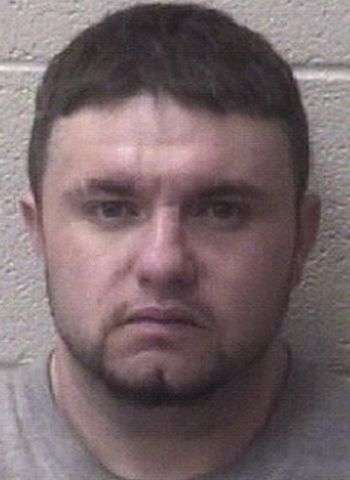 33-year-old Brantly Lee Minton of Stony Point was arrested by Alexander County Sheriff’s Officers Saturday (September 11) on one count of felony fleeing to elude arrest with a motor vehicle and three counts of felony assault with a deadly weapon on a government official. He was also charged with misdemeanor counts of driving while license revoked, reckless driving to endanger, and one count of injury to personal property.

At about 6:30 Saturday evening, numerous calls came into Alexander County Communications regarding a driver who was traveling through fences and yards in the Sugar Loaf and Vashti communities. Sheriff’s Officers and Troopers with the North Carolina State Highway Patrol located a white Dodge Durango S.U.V. on Black Oak Ridge Road. The vehicle was being driven erratically and failed to stop, which led to a pursuit.

The Dodge eventually reached N.C. Highway 16 South at speeds of 70-to-80 m.p.h. The driver swerved and struck a patrol vehicle. The driver continued on Highway 16 and turned onto Commercial Park Avenue where the vehicle entered a gravel lot at a building owned by Alexander County. As Officers exited their patrol vehicles, the vehicle accelerated, causing Officers to jump out of the way to avoid being struck. Two patrol vehicles were hit. The vehicle traveled back up Commercial Park Avenue and turned into the Alexander County Sheriff’s Office parking lot, where it crashed through the exit door of the sallyport and came to a stop.

Officers exited their patrol vehicles and gave commands to the driver. The driver was extracted from the vehicle, where he continued to resist Officers and refused to follow verbal commands. The driver, Brantly Lee Minton, was arrested and jailed under a $350,000 secured bond. A first appearance in Alexander County District Court was scheduled today (September 13).

Burke Board Of Education Votes To Require Masks In Schools, Names Assistant Superintendent

40-year-old Bobby Lewis Cloer of Sulpher Springs Road N.E. in Hickory has been arrested by…