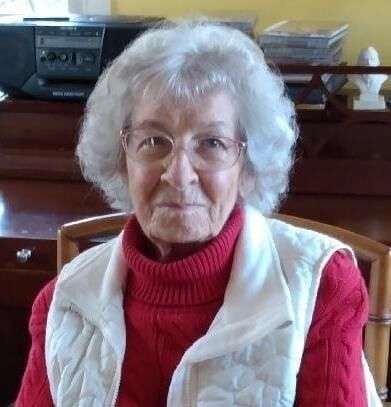 Nina Thompson Anderson
courtesy of N.C. Center for Missing Persons
[NOTE: The Silver Alert for Ms. Anderson was canceled at approximately 1 p.m. today (June 2). No further details are available at this time.]

The N.C. Center for Missing Persons has issued a Silver Alert for a missing endangered woman. She is 89-year-old Nina Thompson Anderson, who is believed to be suffering from dementia or some other cognitive impairment.

Ms. Anderson is a white female. She is 5’2″ tall and weighs 95 pounds. She has short white hair and blue eyes. Ms. Anderson walks with a bronze cane and was last seen wearing a white flower-print shirt and blue pants.

Ms. Anderson’s vehicle is a white 2003 Buick Century Custom with North Carolina license tag number WVF8074. She was last seen at an address on Maplewood Drive in Morganton.

Anyone with information regarding the whereabouts of Nina Thompson Anderson should call Investigator Cody Storie at the Morganton Department of Public Safety, 828-437-1911.