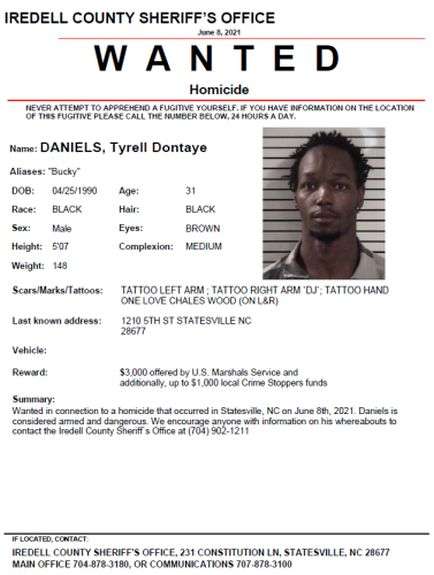 It’s been approximately two-and-a-half months since a Hickory man was killed in an Iredell County shooting and authorities are still seeking the suspect. 20-year-old Zion Treyshaun Gaither was killed in the incident early on June 8.

Two different agencies are offering rewards for information leading to the arrest of the suspect. The Iredell County Sheriff’s Office is continuing to seek 31-year-old Tyrell Dantaye Daniels, who is wanted for one count of murder in connection to an incident June 8, which was previously reported on WHKY. The last known address for Daniels was 1210 5th Street in Statesville.

The incident occurred on Williams Road, near west Statesville. Iredell County Sheriff’s Office Homicide Investigators and Crime Scene Investigators were called to the scene and then a secondary scene at Iredell Memorial Hospital shortly after 3:00 a.m. Mr. Gaither was confirmed deceased at the hospital.

The U.S. Marshals Service is offering a reward of $3,000 and Iredell Crime Stoppers has announced that they could pay up to $1,000 for information leading to the arrest of Daniels. Daniels has a criminal history which contains convictions for offenses including felony counts of first-degree burglary, attempted robbery with a dangerous weapon, possession of a stolen firearm, and assault with a dangerous weapon inflicting serious injury.

Daniels has reportedly made threats against law enforcement officers in the past. He should be considered armed and dangerous. You can submit a tip to the U.S. Marshals online by using USMS Tips or by using their app. The Iredell Crime Stoppers phone number is 704-662-1340. You can also call the Iredell County Sheriff’s Office at 704-902-1211.

32-year-old Joathan Sherwood Watson of Lenoir, will serve a prison sentence of six to eight…