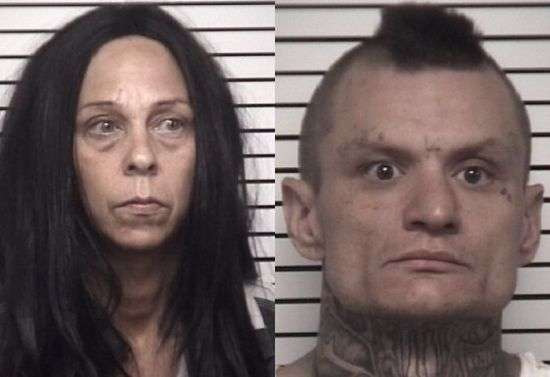 47-year-old Christine Yvonne Mays of Charlotte Highway in Mooresville and 33-year-old Allen Jennings Campbell of Liledoun Road in Taylorsville were arrested Friday (June 24) by Iredell County Sheriff’s Officers. Mays is charged with felony counts of possession with intent to sell or deliver crystal methamphetamine and maintaining a residence for the sale or use of a controlled substance. Campbell is charged with felony counts of possession of crystal meth and possession of a firearm by a convicted felon.

On Friday, investigators with the Iredell County Sheriff’s Office Narcotics Division with the assistance of Road Patrol Deputies executed a narcotics search warrant at an address on Charlotte Highway. Investigators had received information regarding the alleged sale and distribution of crystal methamphetamine by Christine Yvonne Mays from that residence.

Surveillance operations were established in the area. Undercover investigators reportedly purchased crystal meth directly from Mays at the home. When the search warrant was executed, investigators and deputies found Mays and Campbell, along with two other individuals inside the home.

A search of the property resulted in the discovery of a hidden handgun inside the bedroom where Campbell was staying and a total of 22.76 grams of crystal meth valued at just over $2,000.

Mays received a $50,000 secured bond, Campbell was issued a $20,000 secured bond. Both suspects were jailed in the Iredell County Detention Center, where they remained as of earlier today (June 28). They’re both scheduled to appear in District Court July 18.