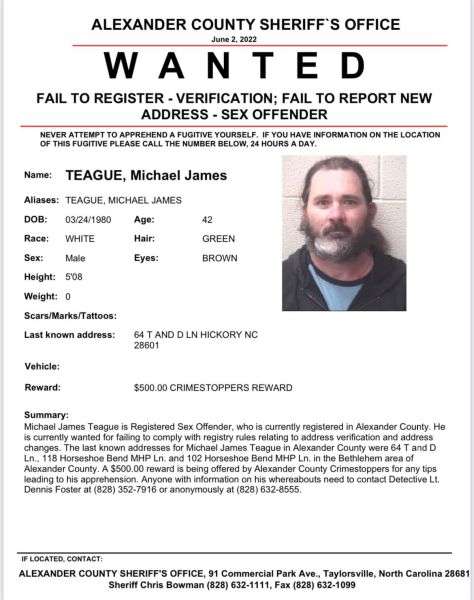 A registered sex offender who allegedly failed to register an address is wanted in Alexander County. 42-year-old Michael James Teague, whose last known address was on T and D Lane in Hickory, is wanted by the Alexander County Sheriff’s Office.

Teague is a registered sex offender in Alexander County, he’s wanted for failing to comply with registry rules relating to address verification and address changes. Additional previous listed addresses for Teague were on Horseshoe Bend Mobile Home Park Lane in the Bethlehem community of Alexander County.

Teague is on the North Carolina Sex Offender Registry as a result of convictions in March, 2004, for two counts of indecent liberties with a minor and second-degree sex offense. The offenses occurred in March and June of 2003. All of the crimes occurred in Catawba County. His minimum registration period following the convictions was ten years.