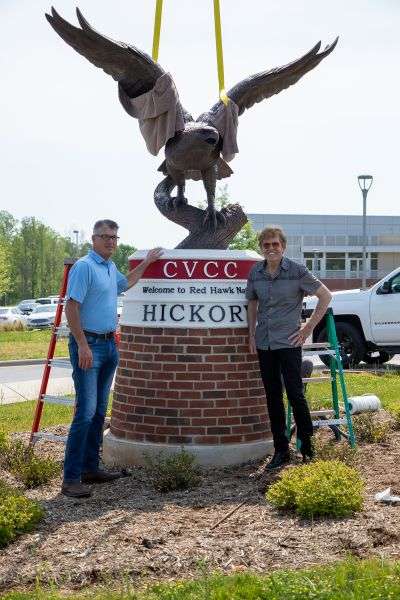 Anyone visiting Catawba Valley Community College will notice two new members have arrived and taken flight on the main campus. Two giant bronze Red Hawk sculptures were installed Wednesday on CVCC’s main campus, residing on the columns in the center of the college’s roundabouts.

The two sculptures were provided through a strong partnership with the city of Hickory.
Zagaroli, a city of Hickory councilman who was instrumental in the sculptures being installed, paid a visit to them after they were installed on Wednesday. He was more than pleased with the final product after this project was started three years ago in partnership with sculptor Jon Hair.

The Red Hawk sculptures were installed by Hickory Construction Company, and it took approximately four hours for them to be raised and mounted with two steel rods and secured with an epoxy adhesive. These two giant Red Hawks were designed by Hair — an Iowa native who now lives in Cornelius, N.C. 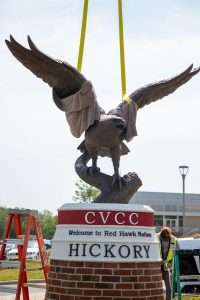 According to Hair, the sculptures took approximately nine to 12 months to make. They are made of silicon bronze and stand nine feet wide with the Red Hawk having a 14-foot wing span. They weight 800 pounds and are hollow with a quarter-inch thickness on the inside. 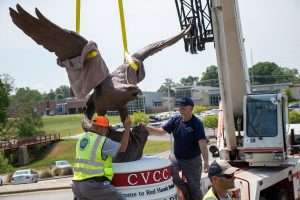 The Red Hawks are two of 70 pieces that Hair has made across North Carolina, and Catawba Valley Community College is the 46th college for which he has made sculptures.
Hair said that the two Red Hawks, which Dr. Hinshaw has donned “Big Red” and “Big Hawk,” are two of his favorite pieces that he’s made.