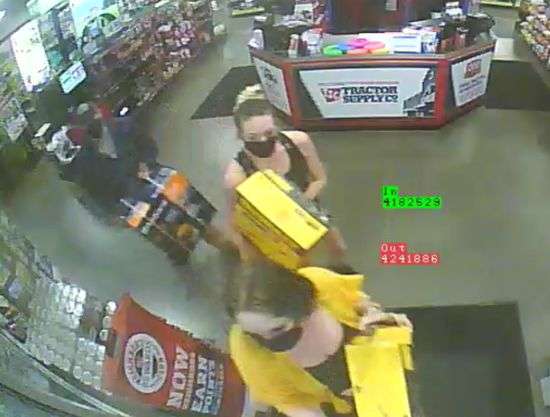 Surveillance photo of suspects in robbery of Tractor Supply on May 25, 2022

Tractor Supply in Denver, NC has once again been hit by thieves. Last Wednesday (May 25) at approximately 7:30 p.m., three people, one man and two women, entered the store. They walked around the store for a few minutes then each person grabbed an item and walked out of the store. They fled the scene in a black four-door vehicle.

Stolen were a leaf blower, a pole saw, and a string trimmer. The value of the items was placed at $780. All three suspects were wearing black masks that covered their nose and mouth.

It’s the second time since May 15 that someone entered the store and stole a piece of equipment. In the previous case, which was reported on WHKY, a white male loaded the generator on a shopping cart and exited the store without paying. The generator was a Champion brand 10,000-watt model valued at approximately $1,100. One person was arrested in that case. 47-year-old Christopher Mark Beeler of Charlotte was arrested in that case, which was also previously reported on WHKY.