suspect and vehicle in break-in at Landmark Self Storage
all photos courtesy of Lincoln Co. Sheriff's Office

Lincoln County Sheriff’s Detectives are investigating a break-in and theft at Landmark Self Storage, 5485 N.C. Highway 150 East in Lincolnton.

Deputies were dispatched to the break-in at 11:20 Sunday night (April 10). When Officers arrived, they saw that a large gate had been knocked down. The gate appeared to have been rammed by a vehicle and run over. Deputies checked the remainder of the facility, but did not find additional damage.

The owner and an employee arrived and told Officers that a black Cam Superline trailer with a John Deere zero turn lawnmower and a side-by-side Polaris off-road vehicle were missing from the lot. The value of the stolen equipment was estimated at $41,000. The cost to repair the damaged gate was estimated at $5,000.

Detectives believe the theft was pulled off by two pickup trucks. Surveillance video showed one of the vehicles as it rammed the gate multiple times. The other truck backed up to the trailer and hooked it up. Both vehicles drove away from the scene. One truck was westbound on Highway 150 while the other turned east.

At about 11 o’clock the same night, Catawba County reported the theft of a blue & gray Ford F250. The stolen truck is similar to one of the trucks involved in the break-in.

The driver of one of the trucks appeared to be a while male with visible tattoos on his neck, forearms, hands, and fingers. He was wearing a dark-colored baseball cap, a dark t-shirt, cargo shorts, and ankle length boots. 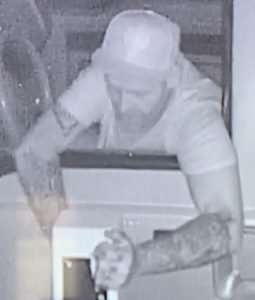 A man was killed in a fire Monday night (February 28) in Burke County. Just…