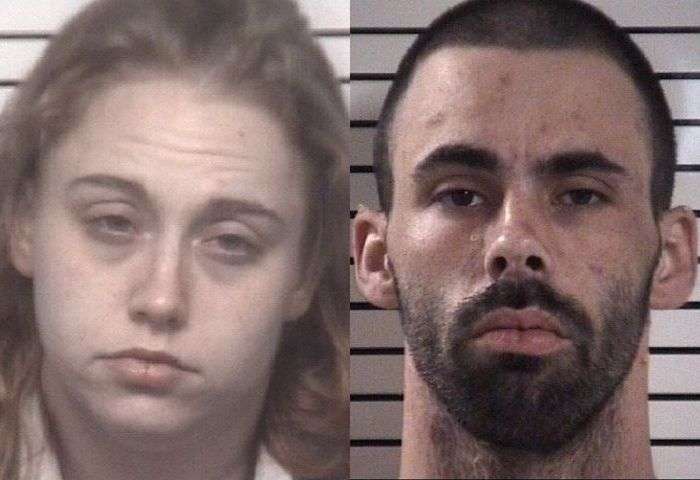 23-year-old Caitlin Amber Conner of North Bost Street in Statesville has been arrested in connection to a number of break-ins to various residences, motor vehicles, and outbuildings at locations across Iredell County. 27-year-old Nicholas Dale Johnson of the same address is wanted in connection to the same crimes.

Around the end of April, the Iredell County Sheriff’s Office received several reports regarding the break-ins. The then-unknown suspects stole lawn equipment, power tools, guns, jewelry, bags, purses, and shoes. During the investigation, Detectives learned that the suspects, who appeared to be a male and a female, were driving a gray hatchback.

Through the help of the victims and concerned citizens who live in the area, surveillance video was obtained, leading to the identification of the suspects as Conner and Johnson. Detectives found the hatchback, but they also learned that the suspects had acquired another vehicle, a KIA Optima.

Arrest warrants were obtained as the crime spree continued. On May 12, Detectives received information that Conner and Johnson had committed another break-in in Mooresville and also learned that the pair were traveling in a blue Chevrolet Impala. A “be on the lookout” call was issued for the Chevy.

A short time later, Deputies located and attempted to stop the Impala. After a brief pursuit, both suspects fled on foot. Officers converged on the area and a K-9 was deployed, along with a drone. Caitlin Conner was quickly taken into custody as she came out of the woodline on Fox Avenue in Statesville. Johnson was not found.

Detectives were given information that the suspects had been staying at a Motel 6 for several days. A search warrant was executed at the hotel, leading to the discovery of several items that Detectives believed were stolen. On May 13, Detectives also executed a search warrant on the suspects’ vehicle where they found stolen property from the most recent break-ins.

Following her arrest, Conner was jailed under a $160,000 secured bond. She was scheduled to appear in District Court today (May 17) in Iredell and Alexander counties. She has a criminal history that includes misdemeanor larceny and misdemeanor assault.

Anyone with information regarding the whereabouts of Nicholas Dale Johnson should call the Iredell County Sheriff’s Office at 704-878-3100 or Crime Stoppers at 704-662-1340.

An area law enforcement agency reports the seizure of meth sent from across the country.…