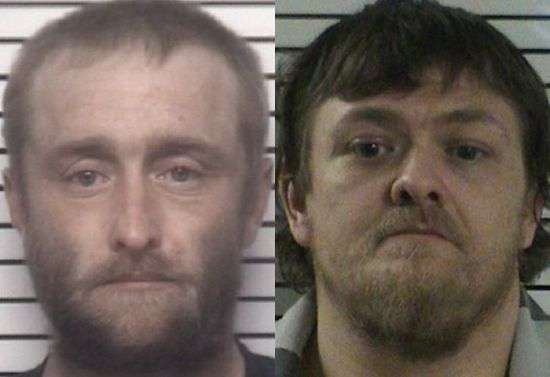 On Saturday (December 5) Iredell County Sheriff’s Officers were conducting surveillance in the 2000 block of Old Wilkesboro Road in reference to a narcotics complaint. The deputies saw a suspicious vehicle leave the area, and conducted a traffic stop on it when they learned it had a fictitious registration plate. Deputies identified the occupants of the vehicle as David Wayne Mecimore of Olin, and Matthew Scott Johnson of Taylorsville.

While speaking with the suspects a Sawzall, a car jack and three catalytic converters were seen inside the vehicle. Canine Unit “Danny” was used to conduct a scan of the vehicle. Danny gave a positive indication to the odor of a controlled substance coming from the vehicle.

A search of the vehicle was conducted and pills were found. Mecimore and Johnson were then questioned about the other items. Mecimore said that he bought and sold catalytic converters and that they were coming from a house off of Old Wilkesboro Road where he had conducted a purchase. Johnson said the same when questioned about the converters, but added that he had received permission to remove it from a car he was looking to purchase on Old Wilkesboro Road.

The deputies continued their investigation, and gathered additional information, statements and evidence. On Sunday, arrest warrants for Mecimore and Johnson were obtained. Mecimore was arrested and received a $5000 secured bond with a District Court date January 6. Johnson has an outstanding warrant for arrest. If you have information regarding Johnson’s whereabouts, call the Iredell County Sheriff’s Office at 704-878-3180.

Ridgeview Branch Library To Close Temporarily For One Week

Hickory’s Ridgeview Branch Library will be temporarily closed next week, from January 18 through January…