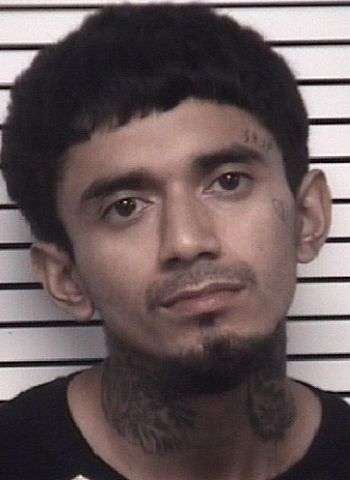 20-year-old Jhonathan Morales of Tabor Inn Lane in Olin has been arrested by Iredell County Sheriff’s Officers on felony counts of assault with a deadly weapon inflicting serious injury with intent to kill, shooting into an occupied vehicle, and possession of a firearm by a felon.

Events leading to the arrest began yesterday (July 26) when the Sheriff’s Office took a call regarding a shooting at an address on Tabor Inn Lane, south of Harmony. The caller said a female had been shot.

Deputies arrived on the scene and found a female sitting in the driver’s seat of a vehicle, suffering from a gunshot wound to her leg. The victim told Deputies that her boyfriend, Jhonathan Morales, shot her and fled the scene. Witnesses in the trailer park verified the victim’s story and confirmed that Morales was the suspect. The female was treated at the scene by Iredell County E.M.S. and then transported to a local trauma center for additional treatment.

As Investigators processed the crime scene, they received information stating that the suspect’s truck was at a location on Friendship Road. Deputies responded and seized the vehicle. Felony warrants for Morales’ arrest were issued.

A short time later, more information came in stating that the suspect was at a location in Yadkin County. Deputies from Iredell & Yadkin counties responded and took Morales into custody without incident.

Morales was transported back to the Iredell County Detention Center where he was jailed under a $50,000 secured bond. He was held without bond on the assault charge, which involved domestic violence. No court dates are currently listed.