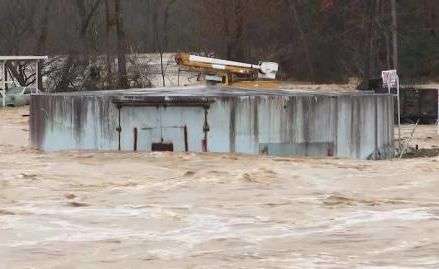 At approximately 4:00 p.m. Friday (November 13), the search and rescue team at Hiddenite Family Campground found the body of the one-year-old boy who had been missing. This fatality brings the total deceased during last Thursday’s (November 12) storm to six, with five from the campground and one from an automobile accident on Hopewell Church Road on Thursday morning.

A 37-member USAR team (Urban Search and Rescue) began search efforts at 8:00 a.m. on Friday at Hiddenite Family Campground in an attempt to locate one adult and the one-year-old child, who were presumed missing. The rescue team discovered the adult’s body at approximately 11:30 a.m.

As of the last update from Alexander County rescue officials, victim identification information was not being released. At the time, Emergency Services personnel were attempting to contact the families. On Thursday, swiftwater rescue teams evacuated 31 people from the campground.

Alexander County experienced major flooding during the recent storm with approximately seven to ten inches of rain on Wednesday night (November 11) and early Thursday morning. Approximately 50 roadways across the county were compromised, with four bridge outages and eleven roads that were still impassable over the weekend.

On Friday, county emergency services had four assessment teams on the ground across the county to determine the extent of the damage. If you have flood damage, visit www.alexandercountync.gov/storm to submit photos and information.