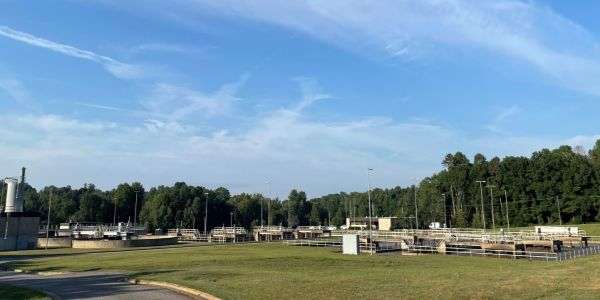 The City of Newton will receive a $33.75 million appropriation from the State of North Carolina to fund a major expansion of the city’s wastewater treatment facility. The upgrades will add 2.5 million gallons of capacity per day to the facility and allow Newton to continue welcoming new development and industry.

Newton’s Clark Creek Wastewater Treatment Facility on McKay Road opened nearly 45 years ago. The plant processes an average of 3.57 million gallons of wastewater each day. Dedicated staff have improved the facility over the decades, but as the city grows and the facility’s mechanical components reach and exceed their lifespans, increased capacity and newer technologies are needed.

The proposed renovation and expansion will allow Newton to handle current and future residential and industrial growth. The project will increase the city’s wastewater treatment capacity from 5 million to 7.5 million gallons daily and cost an estimated $45 million. Project design and engineering are expected to begin in the coming months, with construction expected to be completed around 2026.

Officials in Newton thanked District 89 Representative Mitchell Setzer, as well as Representative Jay Adams and Senator Dean Proctor, for securing the $33.75 million appropriation in North Carolina’s 2022-2023 budget. Formally known as the Current Operations Appropriations Act of 2022, the budget bill was enacted July 11 upon receiving the signature of Governor Roy Cooper. The appropriation is more than 5.5 percent of overall state funding allocated to water and sewer infrastructure in the new budget year.

This investment in wastewater infrastructure ensures Newton is poised to capitalize on private development interest stemming from citywide revitalization efforts and the widening of N.C. 16 between Newton and Charlotte. More information about the project as it advances will be available at www.newtonnc.gov.