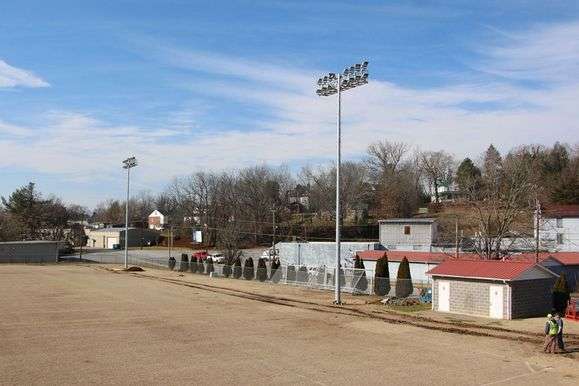 Photo courtesy of City of Lenoir

Contractors have started installing new lights at Mack Cook Stadium in Downtown Lenoir. The lights will help the city bring more events to the location and build on improvements to The Campus at the Historic Lenoir High School. City Council approved the project in August last year. The City was able to raise all the funds for $213,522 project via grants and private donations.

Parks & Recreation Director Kenny Story said that the new lights will allow the City to hold evening events including sports games, concerts, community festivals. He added that the city wants to get more use out of that field, and the lights will help make that happen. 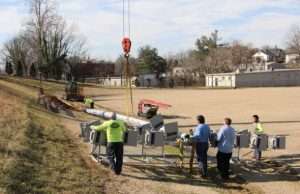 Workers have set all four light poles. Each pole holds 16 lights and there are 232 LEDs per light. That’s 14,848 LED lights that will shine down on Mack Cook Stadium during special events. The contractor still has to install power, run all the electrical, and set the lights to shine in the correct positions on the field. That work should be completed in a few weeks.

In addition to the new lights, Council approved the purchase of two sets of five-row aluminum bleachers for the stadium. The bleachers were funded with federal Community Development Block Grant funds.

Mack Cook Stadium is part of The Campus at the Historic Lenoir High School. The Campus includes the LHS auditorium, gymnasium, band building, trades/masonry building, Mack Cook Stadium, and a recently acquired property across Harper Avenue that could become a Farmers Market Pavilion. Last year, staff started the process to renovate and redevelop those properties into a new event venue in Downtown Lenoir. The Campus will be a focus of the City’s Downtown Master Plan project that will start this month.

[News release and photos courtesy of City of Lenoir]