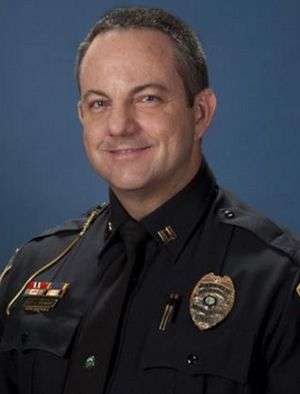 Jason Whisnant has been sworn-in as the new Chief of Morganton Public Safety. Chief Whisnant joined the department in 1997. He served most recently as Captain of Field Operations.

Whisnant is a lifelong resident of Burke County and graduated from Freedom High School. He attended Western Piedmont Community College’s Basic Law Enforcement Training in 1995 and began his law enforcement career with the Glen Alpine Police Department and the Burke County Sheriff’s Office.

While at Morganton Public Safety, he has served as DARE Officer, Community Police Officer, SERT Team member, HazMat Team member, Sergeant of Field Operations, Captain of Support Services, and Captain of Field Operations. He is also a certified firefighter and possesses numerous certifications in police and fire services. Whisnant has served as an instructor in law enforcement classes in the Basic Law Enforcement Training program at Western Piedmont Community College.

Chief Whisnant earned a Bachelor of Science Degree in Human Services and a Master’s Degree in Mental Health Counseling & Education Specialist from Gardner Webb University. He has been licensed by the N.C. Board of Clinical Mental Health Counselors since 2012. He is a graduate of the Administrative Officers Management Program at North Carolina State University and the Municipal Administrative Course at the U.N.C. School of Government.

The selection of Chief Whisnant was made after a nationwide search and the completion of an assessment under the guidance of the Management & Personnel Services Group, a consulting firm affiliated with the N.C. League of Municipalities.