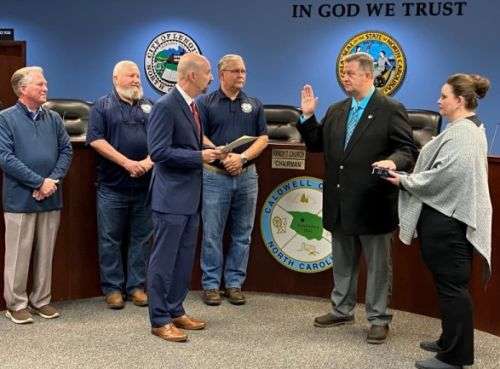 During Monday’s (November 1) Caldwell County Board of Commissioners meeting, new County Manager Donald Duncan took the Oath of Office and assumed his duties as manager.

Duncan, who was named manager during a September 27 Board of Commissioners meeting, comes to Caldwell County from the City of Conover, where he served as City Manager since 2006. In Conover, Duncan managed a $32 million budget and all city operations which included 153 employees.

He was selected from a pool of applicants from across the region, state, and country. Applicants from as far as Georgia applied for the position, but in the end, the Board chose Duncan due to a combination of his education, experience, and personal characteristics.

A graduate of Appalachian State, Duncan holds a Bachelor of Science in Political Science with a concentration in town, city, and county management. He also earned his Master of Public Administration from Appalachian State.

Overall, Duncan has Nearly 20 years experience as a local government manager. The Western Piedmont Council of Governments (WPCOG) assisted the county with the search process. The WPCOG is a regional planning, service, and economic development agency that is owned by and serves the 28 local governments in Alexander, Burke, Caldwell, and Catawba Counties.