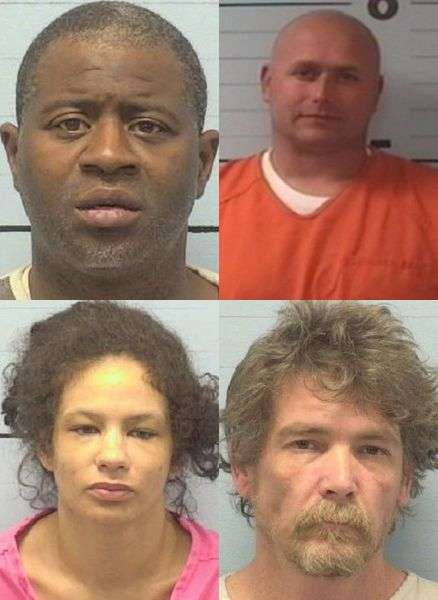 On Tuesday (May 11), the Burke County Sheriff’s Office arrested eight individuals on 21 outstanding warrants. Those warrants consisted of 31 charges, 20 misdemeanors and 11 felonies. Four of the suspects were charged with felony offenses.

41-year-old Terrence Bradlee Thompson of Lemon Tree Lane in Morganton is charged with felony counts of possession of a firearm by a felon, possession of cocaine, and flee to elude arrest with a motor vehicle. Thompson is also charged with misdemeanor non-support. He received a $50,000 secured bond and a $120 cash bond on the non-support charge. He is not listed as an inmate in Burke Couty. A District Court appearance is scheduled for June 3.

39-year-old Chad Anderson Newton of Bridges Avenue in Connelly Springs is charged with felony breaking and entering. He was released on a written promise. A Superior Court date is June 21.

26-year-old Justice Renee Weaver of Vine Arden Road in Morganton is charged with felony counts of possession of heroin, flee to elude arrest with a motor vehicle, breaking and entering to a building, and larceny after breaking and entering. She’s also charged with three misdemeanor counts of larceny and one misdemeanor count of unauthorized use of a motor vehicle along with a count of driving while license revoked. Weaver was placed in jail in Morganton under $31,000 secured bond. She remained in jail as of earlier today (May 14). She has court appearances scheduled between now and July on seven different days starting with May 21.

48-year-old Michael Allen Lyons of Bethel Road in Morganton is charged with felony counts of breaking and entering, larceny after breaking and entering, and possession of stolen goods. Lyons received a $25,000 secured bond. He is not listed as an inmate in Burke County. A District Court appearance is scheduled for June 3.

39-year-old Kelvin Anthony Dula, who is listed as a homeless person, was arrested Tuesday (May…