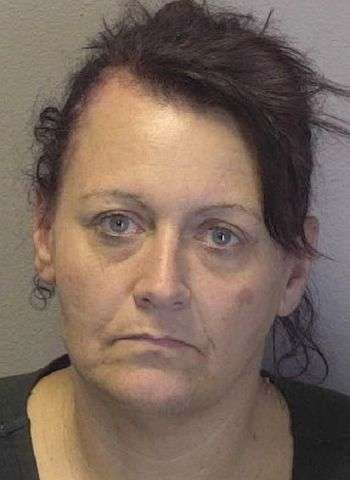 42-year-old Amanda Lamoureaux Bowman (also known as Amanda Nicole Fugitt) of Old N.C. 18 in Morganton was arrested by Hickory Police Monday afternoon (September 13) on a long list of outstanding felony and misdemeanor warrants. She was charged with felony counts of obtaining property by false pretenses and two counts of possession with intent to manufacture, sell, or deliver methamphetamine. Bowman was also charged with three felony probation violations. Misdemeanor warrants were served on charges of resisting a public officer, driving while license revoked, and fictitious or altered title, registration card, or tag. The felony warrants are all from Burke County while the misdemeanor charges are from Burke and Caldwell counties. Bowman is on probation as she serves a 60-month suspended sentence following a July 2020 conviction in Burke County on felony counts of possession with intent to sell a schedule II controlled substance and obtaining property by false pretenses.

The suspect was taken into custody without incident at about 2:45 p.m. Monday at a grocery store on Highway 70 S.W. in Hickory. She was jailed in the Catawba County Detention Facility with bond set at $189,000, secured. As of yesterday (September 14), she was listed as an inmate in Caldwell County. Bowman has District Court dates scheduled today in Lenoir and on November 5 in Morganton, with a Superior Court appearance in Morganton scheduled for November 8.