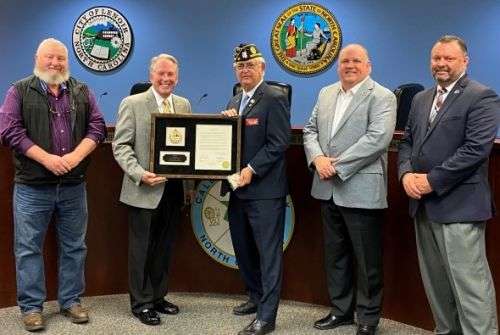 Oxford, who served in the Marine Corps from 1967-1970 and in the North Carolina National Guard for 34 years, became a veterans’ advocate with the American Legion in 1986. Since then, he has dedicated his life to promoting veterans’ rights and benefits throughout the county and across the country.

The only American Legion National Commander to hold the office more than one year, Oxford was selected by the 1.8 million members to lead the organization through the COVID-19 pandemic, serving from 2019-2021.

Oxford is the sixth person to be given the county’s Medallion of Honor, which was created to recognize citizens who have contributed to improving the quality of life in Caldwell County.

In addition to honoring Oxford, the board also recognized Finance Director Tony Helton for his service as Interim County Manager. The board noted Helton’s continuity of leadership, which allowed staff to move forward with important projects, such as construction of a new animal shelter, the annual county audit, and ongoing COVID-19 mitigation and relief effort.

26-year-old Brock Mackie Towery of 20th Avenue Court N.E. in Hickory has been arrested by…