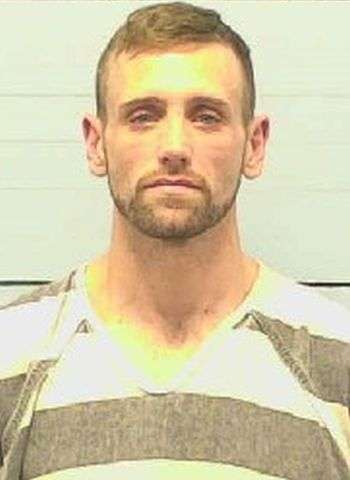 30-year-old Derek Wayne Simmons of McDowell County was arrested Friday (November 19) by Morganton Public Safety Officers. He’s charged with felony possession of a firearm by a felon along with misdemeanor counts of stalking and assault on a female.

On Friday, officers with the Morganton Department of Public Safety were dispatched to an address on Falls Street in reference to a disturbance. Burke County Communications received a call about a man holding a female against her will. The man was reportedly in possession of a firearm.

Officers arrived at the scene and they were able to find the woman who had been physically assaulted. The suspect in this case had already left the scene prior to Law Enforcement’s arrival. Officers interviewed the woman and learned that Derek Wayne Simmons had been on scene and left a firearm behind.

The firearm was seized by officers and the victim was given medical aid at a local medical facility. A Warrant for Arrest was obtained for Derek Simmons by Public Safety and a follow up was conducted shortly after at the apartment complex on Falls Street.

When officers arrived at the scene, they found the apartment had been forced open and Derek Simmons was inside. Simmons was taken into custody without incident. He was placed in jail in Morganton where he remained as of earlier today (November 23) under $30,000 secured bond. He has District Court appearances December 13 and January 3.