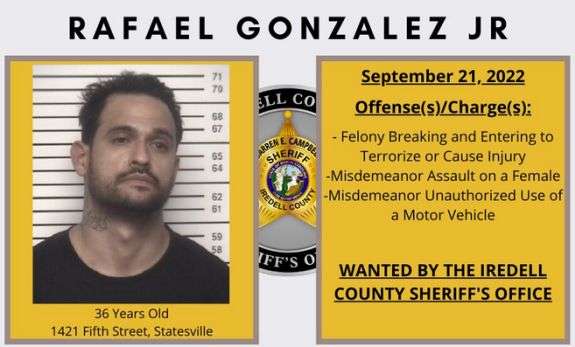 A man is wanted by the Iredell County Sheriff’s Office in connection to a break-in and assault. 36-year-old Rafael Gonzalez, Jr. of Fifth Street in Statesville is wanted for felony breaking & entering to terrorize or cause injury, misdemeanor assault on a female, and misdemeanor unauthorized use of a motor vehicle.

On September 21, 2022, deputies responded to Rita Avenue in reference to a domestic dispute. Officers began processing the scene and a deputy interviewed the victim that was located inside the residence. According to the information received, the suspect entered the residence through the bathroom window. The suspect assaulted the victim and then left the residence in the victim’s vehicle.

According to the North Carolina Department of Public Safety offender web page, the most recent conviction listed for Rafael Gonzalez, Jr. was in Catawba County on October 6, 2021. He was convicted on that date of felony counts of breaking & entering, larceny after breaking & entering, possession of stolen goods, and speeding to elude arrest. He received probation and a 30 month suspended sentence on that date. Gonzalez has multiple convictions dating back to 2006.

If you recognize and can provide information to assist this office in the arrest of this suspect, call 704-878-3180. All information received is confidential.