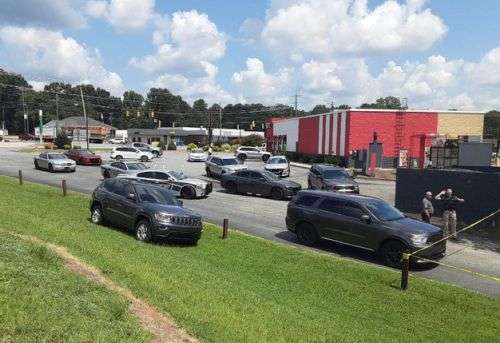 An incident described as a drive-by shooting is under investigation in Taylorsville. A man was injured in the incident, that occurred shortly after noon Monday (August 30), according to the Taylorsville Police Department.

The victim was struck at least once and possibly multiple times. He was airlifted to a regional trauma center with life-threatening injuries. The incident took place between the KFC/Taco Bell and Ride With Pride Car Wash in west Taylorsville.

As a precaution, four Alexander County Schools were placed on Code-In status. There was no indication the suspect or suspects were ever on any school campus. A witness told police a silver or white vehicle with front-end damage was spotted leaving the scene.

Numerous shots were fired, investigators say possibly 30 or more. Gunfire struck the nearby KFC/Taco Bell and and a sign nearby. A photograph of the possible suspect vehicle involved in the incident was released. The photo was taken from surveillance video supplied by Ride With Pride Car Wash.

If you have any information about the incident, call the Taylorsville Police Department at 828-632-2911.