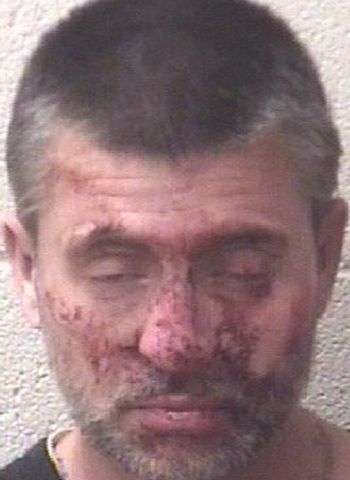 38-year-old Adam Keith Jones of Statesville was arrested Friday (October 21) by Alexander County Sheriff’s Officers. He’s charged with felony assault with a deadly weapon on a government official along with two misdemeanor counts of assault on a government official or law enforcement officer. In addition, Jones is charged with flee to elude arrest with a motor vehicle, hit & run fail to stop with property damage, and reckless driving with wanton disregard.

Events leading to the arrest began when authorities in Iredell County attempted to locate 38-year old Adam Keith Jones of Statesville for the purpose of serving an involuntary commitment. Jones reportedly fled the scene and led Iredell County Deputies on a chase that proceeded west on US/64-90.

Deputies from Alexander County were asked to assist. The pursuit continued into Alexander County where Jones allegedly crashed into an Alexander County Sheriff’s Office cruiser. The deputy was not injured but the county vehicle sustained heavy damage. Jones was removed from the vehicle and allegedly became combative. According to reports, the suspect attacked an officer or officers prior to being restrained and taken into custody.

Following his arrest, Jones was incarcerated in the Alexander County Detention Center under $125,000 secured bond. He remained in jail as of earlier today (October 24). A District Court appearance was scheduled today. More charges are possible in both Alexander and Iredell Counties.