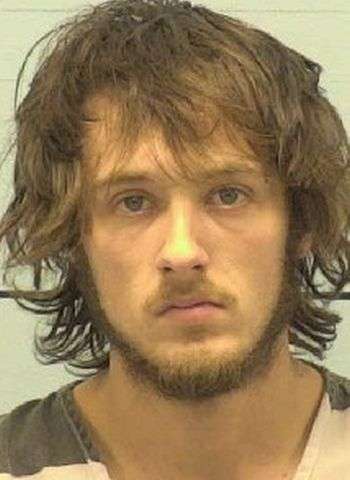 21-year-old Dakota Jordan Bradley of Mountain Meadows Drive in Morganton was arrested Friday (April 14) by Burke County Sheriff’s Officers. He’s charged with felony counts of speeding to elude arrest and possession of a stolen motor vehicle. Bradley is also charged with careless and reckless driving, speeding, failure to stop at the scene of an accident, failure to stop at a stop sign, and driving while license revoked.

On Friday, at approximately 2:40 p.m., a Burke County Narcotics Deputy saw a motorcycle on Burkemont Road without a license plate. The Deputy activated his blue lights and siren, but the motorcycle continued down Jenkins Road. The motorcycle reached speeds of 80 miles per hour as it traveled onto Charlie Crawley Road, Duckworth Circle, and onto Highway 64.

The motorcycle turned on Salem Road striking a car at the stop sign. The rider continued on and attempted to drive through a field on Mountain Glen Circle and wrecked. The motorcycle operator, Dakota Jordan Bradley, complained of abdominal pain and was transported by EMS to a local hospital and released.

The motorcycle had been stolen in December of 2021. Bradley was issued a $10,000 secured bond. He is not listed as an inmate in Burke County. A District Court date was scheduled Monday (April 18). His next appearance in District Court is scheduled for May 9.

29-year-old Nathan Lee Thomas, who is listed as a homeless person from Hickory, was arrested…