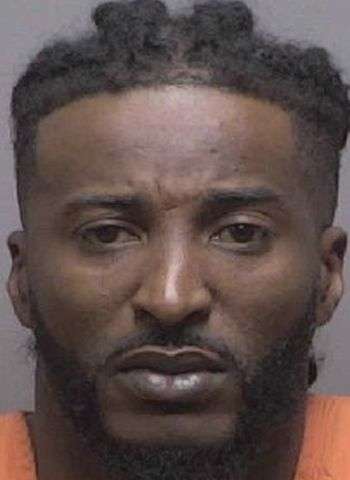 U.S. District Court Judge Kenneth D. Bell sentenced 39-year-old Aleef Jamar Nicks of Charlotte to 108 months in prison on drug trafficking and firearms charges resulting from a traffic stop in Lincoln County on April 30, 2020. Nicks must also serve three years under court supervision after he is released from prison.

On April 30, 2020, a Lincoln County Sheriff’s Office deputy was traveling Mundy Road when he observed a vehicle without any tail lights. The officer activated his emergency lights and siren and the vehicle pulled off to the side of the road. When he approached the vehicle he could smell the odor of marijuana and saw a black backpack on the rear seat.

The female driver, who stated she was seven months pregnant, and a male passenger were asked to exit the vehicle. The male identified as Aleef Jamar Nicks was searched and officers discovered marijuana, cocaine and $600 in cash. A search of the female led to the discovery of a large bag of narcotics in her clothing. During the investigation it was learned that Nicks removed cocaine from a backpack and placed the drugs on the driver.

Inside the backpack in the vehicle deputies discovered $4,000 packaged in four bundles of $1,000 each. They also found a Ruger pistol. Nicks was taken before a Lincoln County magistrate and charged with two counts of trafficking cocaine, possession of marijuana, possession with intent to sell and deliver cocaine, possession of a firearm by a convicted felon, possession of drug paraphernalia, and maintaining a vehicle for a controlled substance. Cell phones seized from Nicks revealed he was engaged in extensive drug trafficking activities.

On November 20, 2020 Nicks pleaded guilty to possession with intent to distribute cocaine and possession of a firearm by a felon. Nicks has three prior federal convictions for drug trafficking and firearms offenses. Nicks is currently in federal custody.

There were no COVID-19-related deaths reported Wednesday (February 17) in Catawba County, leaving the total…