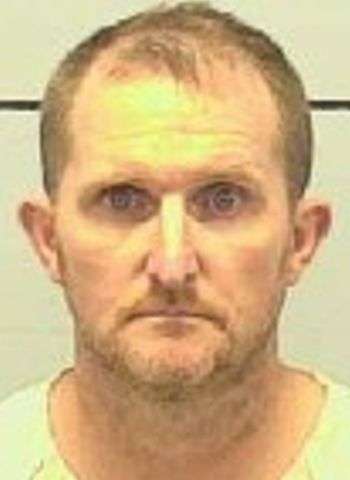 On Sunday, Burke County Sheriff’s Deputies responded to the Marathon Convenience Store on Lenoir Road in Morganton shortly after 7:00 a.m. The first deputy was told by the store clerk that two people were passed out in a car that was running at the diesel fuel pump. The deputies reported that they saw a butane torch, a glass pipe and naloxone in the car.

When the man and woman were awakened, the driver reportedly cursed the deputy and drove away in the direction of Lenoir. The deputies initiated their blue lights and sirens and pursued the vehicle on N.C. 18/U.S. Highway 64. After reaching a speed of 100 mph, the driver pulled over to the right shoulder of the road at Chesterfield Wood Products.

The female passenger got out of the vehicle and the driver continued traveling toward Lenoir. The driver reached a speed of 130 mph when he crossed into Caldwell County. After making turns on several roads, the driver’s left front tire hit stop sticks placed by Lenoir Police on Clarks Chapel Road. This blew out the tire which came off the rim when the driver turned onto Connelly Springs Road.

Deputies from the Burke and Caldwell County Sheriff’s Office along with Lenoir Police Officers took the driver, Brandon David Earp, into custody without further incident. A search of the car reportedly led to the seizure of a small amount of white powder, methamphetamine, and a glass pipe that were turned over to Burke County Narcotics deputies. Bond for Earp was set at $30,000 secured. He is not listed as an inmate in Burke County. His next District Court date is April 18.

52-year-old Timothy Allen Bumgarner, who is listed as a homeless person, was arrested today (February…