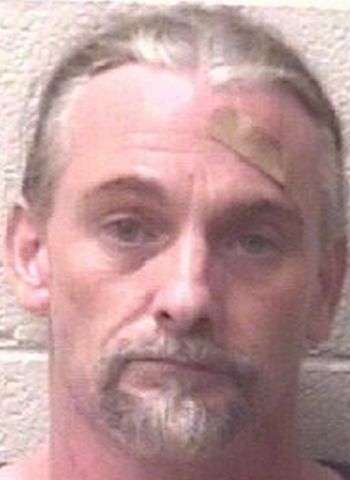 45-year-old Christopher Ronald Thomas Perkins of Lenoir was arrested Thursday (July 28) by Alexander County Sheriff’s Officers. He’s charged in Alexander County with flee to elude arrest with a motor vehicle, failure to heed blue light or siren, reckless driving to endanger, speeding, failure to wear a seat belt and injury to personal property. Perkins is charged in Caldwell County with offenses that include felony counts of possession with intent to manufacture, sell, and deliver methamphetamine and maintaining a vehicle, dwelling, or place for controlled substance.

According to reports, Perkins was arrested following a vehicle chase in eastern Alexander County Thursday afternoon. The North Carolina State Highway Patrol attempted to stop a vehicle reportedly being driven by Perkins in Hiddenite. Perkins was recognized as having multiple felony drug warrants in Caldwell County. He refused to stop after a trooper activated his blue lights and siren.

Alexander County Sheriff Deputies responded to the pursuit. Perkins reportedly led officers on a brief chase that ended at the intersection of U.S. 64-90 and Old Mountain Road. Three law enforcement vehicles were damaged during the chase.

In March, Caldwell County Sheriff’s Deputies arrested Perkins on a long list of charges that included multiple counts of trafficking in methamphetamine and maintaining a vehicle for trafficking narcotics. He was later released on bond.

As of this morning, Perkins was being held in the Alexander County Detention Center under $540,000 secured bond. A District Court date is scheduled for Monday (August 1) in Alexander County. He has a Caldwell County Superior Court date September 12. Additional charges are possible.